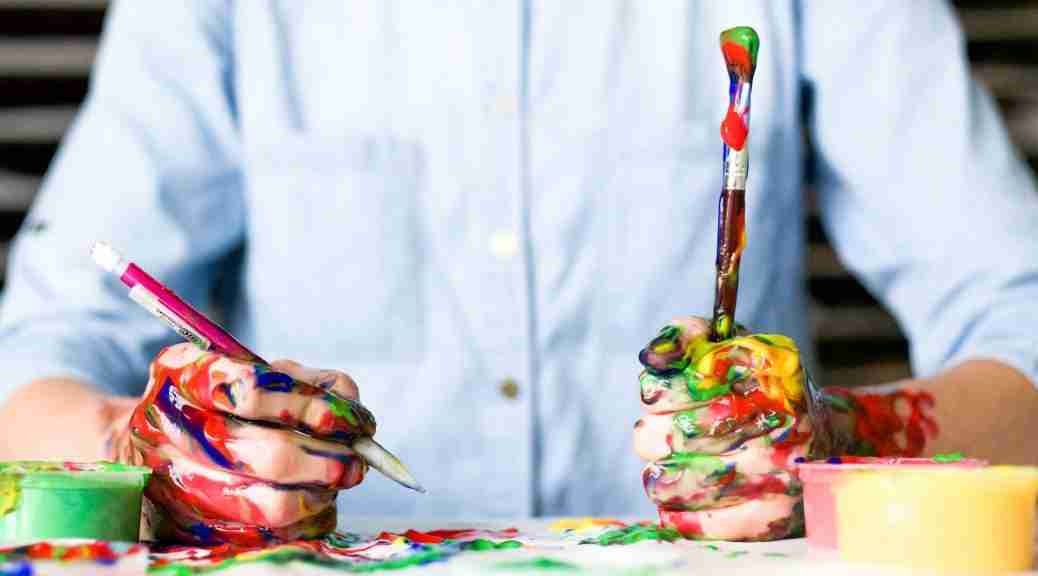 Adam: How did you choose this path?

Since young, I was always a dreamer and I enjoyed drawing, but my parents didn’t approve of it and wanted me to do a bachelor’s in engineering. So I did science in high school to follow that path, but during the second year, I had a breakdown. I didn’t enjoy what I was doing at all.

I decided that even if it wasn’t what my parents wanted, what filled me was art and I wanted to follow an art bachelor. So I applied and I didn’t tell them until I was accepted for the bachelor. In the end it went well, they didn’t get angry, but of course, it could have also gone badly.

Adam: What made you notice that you didn’t want to continue with engineering?

I don’t really remember, but I think that it had to do maybe with having a hard time with studies, seeing that I could get good grades and not enjoy it at all.

Then I thought about how I would have to do the same during the bachelor and then during my work life and continue feeling the same and I decided that I would rather end up living below a bridge than be bound within a cubicle.

When I still didn’t know if my parents would support me, I decided that even if they didn’t I would pay for it myself and that same summer I started saving up for my studies, I was going to do it no matter what. And now I think that I wouldn’t change it no matter what, even with all the hard parts I don’t want to switch to another path.

Adam: How was the moment of telling them?

I was in the gym with a friend when I received the news and when my mother came for me she found me crying.

She didn’t know why I was crying and when I told her that it was because I had been accepted in that bachelor she was quite surprised. None of my parents were expecting it at all.

How are you finding the bachelor?

It has a lot of highs and lows. Before getting into it you imagine that it they will teach you how to draw, how paint, but when you get there they just tell you to start working without giving you any direction.

Then you show them what you did and you receive feedback that in most cases is just I don’t really like what you made, which you can take the first few times but then it starts hurting you more.

The first day they told us: Being positive only about 10% of you will make it by being an artist and of course that 10% will be made of men, so you girls that are about 80%, you won’t be able to make it big.

So as you can see they paint it quite bleak and I have friends that left this path because or they expect too much from you, or you stand out or the only thing they will do is criticize you. I have a few friends that left if because they couldn’t take it and ended up depressed.

You think, maybe next year will be better, but then you see that it gets a little bit worse and you learn to accept it.

From about 300 on the first year only about 100 make it to the end. Which is quite sad specially with a path in arts which is supposed to be more beautiful .

What kept you going?

The freedom. I personally don’t hate this bachelor. I enjoyed most of the first year, but on the second I only enjoyed about 2 and on the third year everything is way more free.

Everything is up to you, which  in turn is problem if you don’t know what you want to make, because here they give you no direction at all. So I will continue until I get the title and then I will have more options

What is it that fills you from this path?

I lived in a college before and during exams you could see people depressed saying that there was no way they could make it or that they didn’t want to study.

I was also stressed and I hated studying, so the fact that whenever I had to work for a subject, that it was mostly something like going to an atelier  where I sculpted a rock, and gave it shape, I just enjoyed doing it.

I didn’t have to think : I have to finish it no matter what, I have to get it done because they are going to grade me on it.

You didn’t think about those you just used your ideas and tried to give them shape while working with your body. Many times you might have an idea that you try and you don’t like but you can still see how it evolves every time you give it shape. I just really enjoyed that.