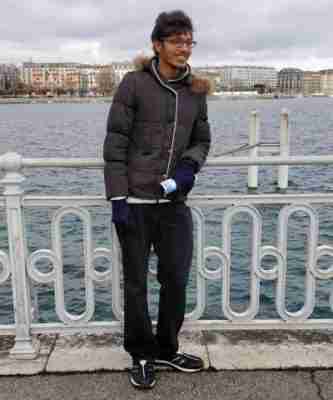 Eighth interview (I) for the project YoungHumansOfScience where I try to interview people related to this field and understand in order to close the gap between society and science.

It was a random choice actually. I was always interested in what happens in the world, and I wanted to understand it.

Adam: Was there something that made you follow your actual path?

In India good students always go to science. I was better than average, my parents also decided on this direction and I was interested. After high school I wanted to follow the path of a doctor, but biotech was growing and I wanted to learn how things work so after trying for 1 year I decided to go for a path that had more molecular stuff.

Once on this path I always thought I would become a researcher. But after finishing I was confused, people said go for industry, while others said go for a master’s. I decided to stick with a master’s degree and chose a master in biotech, the first year was in India. We studied human genetics and molecular biology. I found it quite interesting and by the end of that year I was selected to go for an exchange program and so I went into biohealth computing.

After that, well things happen and I never thought I would go for a , but it just came from thinking

‘Why not try something that would benefit society and me?’

Right now I am travelling around India presenting my idea to different universities, hospitals cosmetic and drug companies, as well as research centres. I am looking for people interested in working in this project and I have a meeting on Sunday with my university at Bangalore to start building the team.

Adam: How was the experience of going to France for the master’s?

I had a small problem at first, a lot of the French people only speak French. At the beginning I couldn’t understand them but now I can even speak French. It also helped me a lot, because this is the year where I had the chance to learn about start ups and how they work.

Another thing that was different was that research is different in India than it is in France. I found the system in France more motivating, they list to your ideas and opinions and try to incorporate them and above all, they are always willing to help you. In India it was a little bit different, the professors were authorities and you had to follow their ideas, they also help you a lot but it is harder to have them incorporate your ideas.

France gave me a chance to see that my ideas could work and the confidence to share them. It gave me confidence that I could create what I working on now, 3D Darma and the pitch is 3D Darma, Skin for the Future.

Adam: I remember that when I met you in July you were more interested in a , what changed in this month?

I didn’t get a PhD in France unfortunately so I will use this chance to work in my project, and I can always go for a PhD after this.

Adam: How did you decide to make the switch from research to a start up?

I didn’t switch from research to start up, I just wanted to do research that is being done in Europe and take it to India.

During the master I was chosen for a scholarship that let 5 students from the master in Molecular Biology go to a partner university in Europe. Once in  France I worked as market analyst for a start up that worked with 3D bioprintinG.

As I was studying it, I saw that the market for bioprinting in India was still small, and the market value of this idea could be way higher in India. With I in giving it the market development it needs right now, so I decided to give it a try.

Join our newsletter to be notified whenever we get a new post. Follow this link to read the second part of this interview.

How was your path? Which decisions did you have to make it? Tell us more about how it was for you in the comments telling us why or how it did. Would like to share the story of your path? Contact me through our form, and we can schedule an interview.