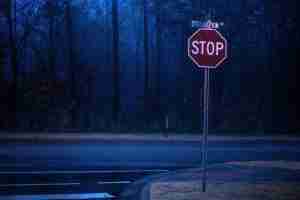 Photo by Sam Xu on Unsplash

Taking into account the 2 compartment model (remember the grocery shopping metaphor) to burn fat you would have to 1) deplete enough of the glycogen stores and 2) reduce the levels of insulin.

When we start depleting our glycogen stores our body starts sending hunger signals. These hunger signals induce the desire to eat more (one of the reasons we feel hungry is that we start depleting our glycogen stores).When we feel hungry we eat and this induces a spike in insulin, but it also derives part of the glucose we consume into the liver to be stored as glycogen.

If we eat enough to stop feeling hungry, but not to fill the glycogen stores, will keep insulin levels high since we haven’t gotten to the threshold necessary to reduce it. When we find ourselves in this situation our body decides to decrease our BMR(basal metabolic rate) by burning less energy, this is part of the reason why the low calorie diets make us feel groggy. Since we still have high insulin levels we are unable to burn fat and as such unable to lose weight.

And this in turn means that the body is forced to slow its metabolism. Which comes with the feeling of groggines. The problems of high insulin levels aren’t limited to only this, but could also end up leading to insulin resistance and this with time to the diabetes type II.

Insulin resistance can be understood as the situation in which your cells aren’t able to respond to the insulin levels in your body and as such are incapable of incorporating glucose, which would mean that they can’t use the glucose obtained from a meal as a source of energy, nor use it to produce fatty tissue.

One of the reactions of our body to this kind of situation is the increase of insulin levels in an attempt to force the absorption of glucose into cells and as such to provide them with energy. The problem with this approach comes from the fact that it is a vicious cycle in which the levels of insulin will keep increasing until your body is incapable of producing levels of insulin high enough or until the levels of insulin are so high that you reduce the fat burning to a minimum and increase the fat storing process to a maximum. 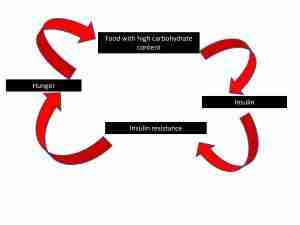 If this cycle keep suffering a positive feedback and increasing the insulin levels due to a continuation of the ”normal” diet we could end up increasing the numbers of one of the 21st century’s biggest epidemics, diabetes type II.

Diabetes type II is characterized by abnormally high levels of insulin. This in turn makes it so that the person has a hard time using the fats stored, as well as having  an increase in the quantity of glucose that is stored as fats. In the long term this is associated with a wide variety of diseases mostly cardiovascular as well as an all around increase in mortality rate.

These facts make the vicious cycle that could come from not reducing insulin levels into an incredibly serious threat for our modern day sedentary lifestyle, and make it into a necessity to break this cycle. 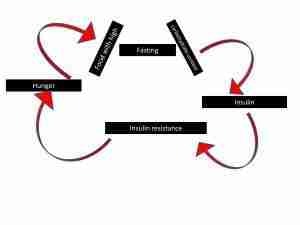 Fasting is one of the ways in which we can break this cycle since fasting implies not ingesting food for certain amounts of time which in turn implies that we don’t suffer the insulin spikes that come together with any kind of food.

Another less drastic way of approaching the same problem is to try low carb high fat and protein diets, since the effect on insulin is way higher in carb rich foods, and by reducing their content we can reduce the increase of insulin that comes after a meal.

This approach can be easier to follow since it doesn’t imply restricting food intake and could potentially make fasting easier.